It turns out, we buy a lot of stuff.

What’s more, according to the study, we are among the least likely to feel guilty about the impact our consumption has on the environment.  So why don’t we give a shit?  Is it because we don’t think we can make a difference?

Well, no, it turns out.  What’s even more perplexing is that we are near the top of the list in believing that our individual choices can make a difference. 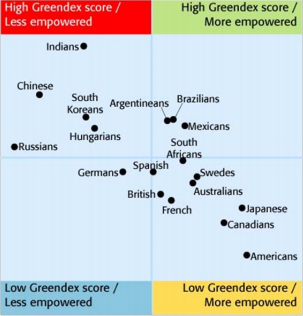 Americans  feel the most empowered to make a difference…and do the least.

The United States has roughly 5% of the population but uses 25% of the world’s oil and nearly the same percentage of heavy metals.

According to the LA Times, there are 300,000 items in the average American home.

Is all this Stuff Making Us Happy?

Of course, deep down we all know the answer to this already.  We don’t need a blog post to tell us that.

Buy Less Stuff.  You know, all that reduce, reuse, recycle stuff.  It’s for real.  And it turns out, it’s pretty damn satisfying.

About ten years ago we rescued a 1930’s stand mixer from near death.  We did a bit of research and refitted it with a new cord and electric brushes.

It’s old.  It’s beautiful.  I feel damn good every time we pull it out.  And it turns out it mixes things just fine.

It’s a new world I guess.  I actually feel guilty when I have to buy something new.